Dear Santa: this is a test. 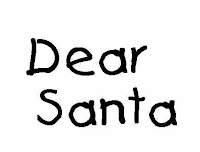 My wife really loves the whole Santa thing. Me not so much. She's way more in charge of Christmas at our house than I am and I appreciate that she makes Christmas very warm and memorable for our whole family so there was no way I was ever going to infringe on her desire to Santa it up.

So when my kids were little and questioned me about Santa's existence, I wanted to tell them the truth but out of respect to my wife I just shrugged my shoulders and said to them, "What do you think?"

What I really wanted to say was, did you know that when the makers of Coke put Santa's image on their packaging, sales increased dramatically?

I didn't have to say or do anything though. She didn't reveal this until she was about 12 but, unbeknownst to us, when my daughter was about 8 she decided to test the Santa theory herself and left a special note, just for Santa, hidden in her bedroom on Christmas Eve.

Unfazed (as she later described it), she kept this all a secret and continued to perpetuate the myth for our sake. Smart cookie eh?

However, this little act of Christmas subterfuge makes me suspect that someday my daughter may work for the Canadian government.
Posted by DB Stewart at 12:32 PM

Email ThisBlogThis!Share to TwitterShare to FacebookShare to Pinterest
Labels: Canada, fathering, how to, man-boobs, men and women, questions, you get what you give

Wow, pretty crafty of your daughter. She should join the guys over at Mythbusters.

My daughter has definitely seen through the Santa Myth. She's 9. I was hoping to keep it going a little longer, if only so I could continue using Santa's Naughty List as a scare tactic to keep her in line.

I'm having a similar issue except with the Tooth Fairy. Dang kids keep hiding the teeth on me! I mean, The Fairy.

Yeah, Libby has been faking it for us since 2 Christmases ago when she found a minuscule "made in China" sticker on the bottom of her new Barbie House from Santa.

She told Sull, Sull told us. I am waiting for her to break... but she asked Santa for Body Shop stuff and an Itunes card this year. I think the jig is up.

I had to tell Sull that Santa wasn't real before he went to Middle School. It was much kinder. He's an arguer.

Once Santa started leaving electronic goods for the kids' friends but not for them, they knew something was up.

My 3rd grader still has not questioned his existence. I am dying to tell him, but my wife refuses to let me do so. The insanity never stops.

Your daughter is one smart cookie!
My son, the ever practical one, never believed in santa. And I didn't mind at all, in fact I encouraged it. I was a single mum. I wasn't going to let a creepy guy in a red suit take credit for the presents I saved for. I do make sure though that he dosen't burst the bubble for any other child who believes.

Freakin awesome. My little sister figured it out way before I did, but mostly through a lot of logic loopholes. She had to explain it to me before I believed her. So, your daughter and my sister are super smart, me, not so much. :)

@DP I like your mythbusters suggestion.
@AHAU We totally gave up on that for that same reason plus one other: one of my daughter's friends received a barbie for losing a tooth!
@Chelle Aw, Libby and Sull, growing up. Time flies, doesn't it?
@TT That'll do it.
@DSWS Probably.
@Cheeseboy I think most people feel the same way.
@Alittlesprite Good for you because you definitely deserved the credit.
@paul I bet you're smarter than you think.

Hopefully she will take her rightful place in the CSIS as a master spy!

I think the power of mythology is seeing through its trappings and respecting its spirit nonetheless. I think you're kiddo got it quite right to keep the myth alive. Everyone benefits from playing the part of generous gift-giver and grateful gift-receiver.

Also, let's face it, the gifts dwindle a bit when the fat man becomes more legend than reality.

Although, I'm not sure about her logic... I mean why would Santa be going into her room... at night... alone...

Hahahaha, I hadn't seen that story before!!

To be honest, I don't really know about how my kids processed the Santa idea when they were younger. I'm not a very big Christmas kind of person, so it wasn't played up much and it's played up even less now that they're older.

But kids, they're smart cookies, they have our numbers long before we figure it out for ourselves. Or at least that's what I think....

I see the humble beginnings of a ninja in your daughter. :)

That is awesome. Your daughter is one cool kid.