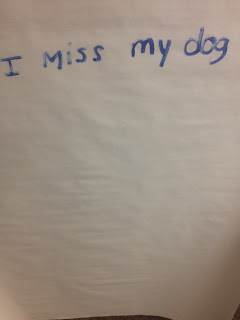 Sometimes one sentence says so much. And no period is needed because it won't stop anyway.

Sometimes it's hard to think about anything but that one thing that's missing.

Sometimes all the wonders can be overwhelming.

Sometimes blank paper invites the deepest conversations we have with ourselves.

Sometimes, if I listen carefully, I can hear the past run up the stairs.
Posted by DB Stewart at 3:56 PM 3 Comments

This is my 92-year-old Gma's first selfie.

Email ThisBlogThis!Share to TwitterShare to FacebookShare to Pinterest
Labels: attitude, best ever, DIY, evolving, fathering, from heartthrob to mall cop, grandparents, happiness, how to, love, pain, quotes, the little things, things one should never outgrow, you get what you give, zoetic 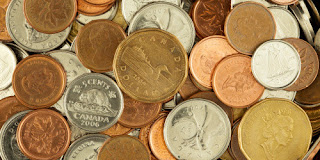 I remember thinking she was really thin. Pale too. Sickly? There was something else too. And then the cashier asked her for like, $36.74, and when she kindly joked that she wanted to pay with spare change, I suddenly realized who she was: my Mom.

Well, not really my Mom because my mother died last year. Yet this woman was the right age and the right build and the right look. Plus she wore a hat, definitely function over fashion, just like my Mom did. And she wasn’t joking. Despite the four other people in line, she was determined to use all her coins. And so she counted them out: toonies, loonies, quarters, dimes, nickels. Just like my Mom would do sometimes. And it was kind of funny. And also annoying. Especially when she realized she didn’t have enough change so she inquired if she could pay the difference with her debit card. Distracted by this little spectacle, this little gift of something like a memory that seemed to be somehow entirely made for me, my impatience faded and I smiled and positioned myself fully in the moment. I suspect everyone else in that cashier’s line seethed but I was tickled to see her again if only in the form of a stranger.

I know how memory works. Science says this experience is the type of memory triggered by recognition. In other words, something familiar unconsciously triggers recall and when this happens we live in the then and the now, sort of straddling two worlds, a sort of re-imagination rather than a remembering.

I like that. I like that there’s a diary inside us all, a journal we can never quite read the same way twice. And life, like a gust of wind, sometimes opens it quite unexpectedly. And when it opens, it loosens, it undoes, it unfurls, it unwinds, it airs.
Posted by DB Stewart at 2:50 PM 4 Comments

In response to terrorism, I saw this simple but sad and profound sign: “humans, but no humanity.” When people forget their humanity, I say, start with the dictionary. Humanity (noun) can be defined four ways:

1. All human beings collectively; the human race; humankind.
The key word here is ALL. I’ll say it again. ALL.

2. The quality or condition of being human; human nature.
After becoming wheel-chair bound due to Multiple Sclerosis, my Grandmother came to live with us for a while. Losing much of her mobility and her independence, she seemed understandably bitter at times, but when she pushed through her struggles, she gave me drawing lessons. Human nature balances somewhere between selfishness and altruism but it always tips toward the right thing. Thankfully. Unlike animals, we humans have a moral predisposition and scorn violence and contempt. Except when we forget. See history.

3. The quality of being humane; kindness; benevolence.
I missed the bus in Grade 1 once. A Grade 6 girl waited with me while my Mom drove to town. She sat very close to me, quietly. I don’t recall her name but when my Mom finally arrived, a Popsicle in her hand, I ran to greet her and quite honestly, I doubt if I even glanced back to thank that girl for essentially being my family while I sat and cried on the front steps of our school for thirty minutes. We were strangers but kindness and benevolence prevailed. As it should. When we don’t forget.

4. The humanities: the study of languages, literature, Latin and Greek classics, philosophy, art, etc., as distinguished from the natural sciences.
I have always found my heart and my truth in stories and in writing and in art. I believe it’s our ability to read and to write and to draw that leads to understanding, to wisdom, to action. One of my early literature obsessions was Shel Silverstein. He said, “Many leaves, one tree.” The key here is ONE. I’ll say it again. ONE.
Posted by DB Stewart at 6:41 PM 5 Comments

Email ThisBlogThis!Share to TwitterShare to FacebookShare to Pinterest
Labels: arts, attitude, books, common sense, fathering, good people, how to, mistakes, no, nuts, quotes, some people, sometimes, things that are most likely the devil, think

Why did the chicken cross the road? Good question, because I hit it with my car on my way to work.

The whole thing took seconds but I recall everything in slow motion. I saw that prairie chicken emerge from the grass at the side of the road. Like all those Roadrunner cartoons I watched on repeat as a kid, its back legs spun like wheels, its neck extended as forward as possible, so fixated, so intent on reaching its destination, like any moment it might catapult like a missile.

Despite some part of me cheering it on, I knew what was imminent because that chicken was simply too far from that elusive other-side-of-the-road. Why the rush chicken? Why did you need to cross the road at that precise time? Were you being chased by Wile E. Coyote? Was an anvil about to drop from somewhere? What’s on the other side? An important meeting? A manicure? The pub? A KFC protest? Who knows, because even though that prairie chicken reached the center line (narrowly avoiding an oncoming truck)...boom: feathers. Chicken, out.

Later at work, I pulled it out of my grill and threw it in a dumpster. Now that’s a bummer of a Friday.

I must say there are things we can all learn from that chicken. We all recognize the meaning behind “running around like a chicken with your head cut off,” and yet, based on this incident, I can tell you that even with his head attached that chicken looked super frazzled. Peeps, getting from point A to point B shouldn’t be so stressful. Just what is SO IMPORTANT on the other side of the road?

Not much. Most of what we worry about never happens. But stress (the result of an overloaded nervous system repeating "imminent threat imminent threat") compels us to believe the best time to cross the road and get to the other side (whatever that may mean to each of us) is yesterday. Some would argue against this vehemently, but let’s be honest: we all have the same amount of time every day. Until suddenly, we don’t. So if you get my meaning, slow down chickens. Slow down.
Posted by DB Stewart at 7:20 AM 1 Comments

Things one (and all) should outgrow:

Why the fuss Canadians?

When asked why he chose equal numbers of men and women to form his cabinet, PM Justin Trudeau said, “Because it’s 2015.”

Boom. Pretty much the equivalent of dropping the mic.

Not all Canadians appreciate this. But I can’t fathom why. If it’s because of sexism, whether willful or through pure ignorance, that’s total bunk. Anyone who has a mother should be ashamed of themselves for that sort of patriarchal nonsense. Personally, I think this decision is a moot point. It doesn’t matter where anyone is on the political spectrum, there is no point debating this. Any debate speaks to bias and sexism because any Canadian citizen age 18 or over, male or female, of a particular race or religion, immigrant or indigenous, ALL PERSONS, have the right to run for elected office. Ever hear of the “Famous Five”? Or the Canadian Charter of Rights and Freedoms? Since 1960. (Go ahead and google it; the history of this is dreadful.) So 55 years later, why is this even a thing?

For those who contend that he chose gender over qualifications or experience like some political publicity stunt, I doubt that, because puh-lease, do people really think there aren't 15 women capable of these leadership roles? Even if some lack experience, it doesn’t mean he chose the wrong people. For eons we’ve had qualified/unqualified, experienced/inexperienced, predominantly male politicians who’ve misrepresented their constituents and our country in numerous and appalling ways. See the Senate for several recent examples. And no, of course, not all are corrupted by power, but definitely a few too many. Anyone, regardless of gender can be nominated, be elected, and be really shitty at their jobs. We Canadians have that right too.

Justin Trudeau could also have answered that question this way: “Because it’s my choice.” It was and it is because Canadians elected him. That’s democracy and despite its misgivings, when I look around the world, I don’t see government better than democracy. So considering it’s November, let’s pause for a moment of silence and reflect on why we have a democracy. And let’s remember how fortunate we are to live where we live.
Posted by DB Stewart at 9:38 PM 5 Comments