The best thing about October?

Although I love a good costume, I'm not much of a Halloween fan except for one thing: horror films. October brings many. My parents initiated my appreciation, unintentionally. They shrugged off notions of youth censorship so I watched whatever film was playing at the drive-in, or wherever they took me. Even I remember thinking at the time: should I be watching this?

Beginning about age 6, I watched whatever they watched: Walking Tall, The Towering Inferno, etc. Two films were particularly memorable: Deliverance and Race with the Devil. This early exposure fueled a quick and unpredictable trigger for irrational fear, and a life-long love for horror fiction beginning with Stephen King. Just a kid, I read The Shining and Carrie before the film-versions were released. He helped make me a reader, igniting my imagination and making me a curious observer of human motive; even then I noticed that heroes and villains were defined depending on the circumstances. Some of those reading and viewing experiences are frozen in time. I can still inhabit the memory of the original Halloween film when Michael Myers drives the stolen station wagon around town, seeking victims. At one point, a character yells at the car and Michael slams on the brakes. That scene still evokes a simultaneous desire to freeze and run.

I think good horror fiction inspires empathy and it awakens our senses to social ills. Isn't Carrie essentially a story about bullying? Think Rosemary's Baby, or The Babadook, or Get Out. These films encourage us to examine what has power over us, and how/why we use power. Think real-life horror: Trump, for example, whose story trapped us all in runaway train case-study on democracy's fragility. Yikes.

Thanks for the shudders, Mom & Dad. Now back to more movies. 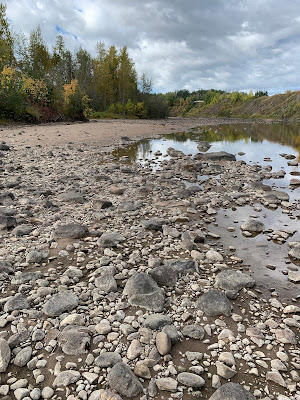 I love this river. It's alive; it verbs its way into a new state each season, quite reliably.

I have walked it thousands of times and this Fall it whispers "ice," yet it also says peace, and calm, and "pay attention." I know that it will be frozen soon, snow-covered, dreaming of Spring, hanging with saskatoon berries again.

But this year, it's different. It's low. Like a new low. Almost everything is exposed and it invites me off the path to uncover new places and peculiar skeletons: a car battery, a radiator, a spoon. But also, children's names written in its sand. Here too are it's reliable stones, waiting to be overturned or skipped across what water remains.

Its current state reminds me that I don't know everything about this river. Although I've been walking next to it for over 30 years, it still holds some secrets, some surprises. It will be strong again; even when I am impatient, even when I worry, this river will do what it does. This river reminds me that lows are temporary.