In honour of Canada Day, today's weird word is "wenis." I kid you not. It's apparently Canadian slang for "a stupid or intolerable person," as in "Don't be such a wenis." Apparently, to the rest of the world, it's part of your elbow. Either way, it's weird.
Posted by DB Stewart at 11:30 PM 3 Comments

Email ThisBlogThis!Share to TwitterShare to FacebookShare to Pinterest
Labels: Canada, weird, wenis, word of the day 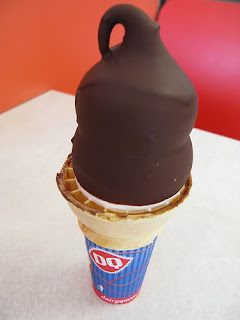 Email ThisBlogThis!Share to TwitterShare to FacebookShare to Pinterest
Labels: things that are most likely the devil 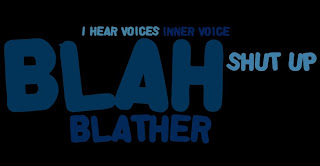 We all have an inner voice. I’m not referring to my conscience though. For me, that’s an altogether different inner voice, one that sounds a little like my Dad and it rarely talks but it does shake its head a lot. I mean a different inner voice. (Confused yet? Sorry.) At the risk of sounding screw-loose, I mean a voice that just talks in the background periodically. This inner voice helps humble me but lately, it’s become quite bad-tempered. Is this happening to anyone else?

This inner voice used to be too quiet. During my youth, it often let me blather on and on like a windbag know-it-all. Well let’s just say it’s louder now and it’s cantankerous. Here’s a recent talk I had with myself.

The conversation was about nothing. Obviously, I enjoy meaningless conversation (nod to the majority of my columns). Anyway, my inner voice grew weary of a ten minute discussion I was having with two guys about the importance of buying decent quality shoes. Things got weird when it said, “Dude, shut up! I repeat. SHUT UP!”

Surprised by its use of the upper case, I asked my inner voice, “Why?!”

“No one cares about expensive comfortable shoes. You sound like an idiot. And old.”

Getting a little offended, “Yeah, so?”

“Seriously? In your discussion on shoes, you referenced a documentary you saw about the coca-cola company. Only old farts talk about their shoe woes and only old farts watch documentaries about the history of coca-cola.”

“And speaking of coca-cola, you actually told your son the other day you were excited about ordering a root beer because you rarely drink it anymore. Do you think he cares? Do you think he thinks that makes any sense? He was probably thinking just drink the flippin’ root beer Dad. There’s no need to talk about root beer and caffeine and insomnia for ten minutes after you order a root beer!”

“Seriously. What’s the next discussion topic going to be? Are you going to share that you’ve walked home then realized you drove to work? Or will you discuss how you drift off during conversations to talk to your inner voice?”

Yup. I am. And here it is. Suddenly my inner voice has become the voice of everyone in my life who ever said I was stupid. Message to my inner voice: zip it. Because in the words of Dr. Seuss, “Be who you are and say what you feel, because those who mind don’t matter and those who matter don’t mind.”
Posted by DB Stewart at 10:09 PM 0 Comments 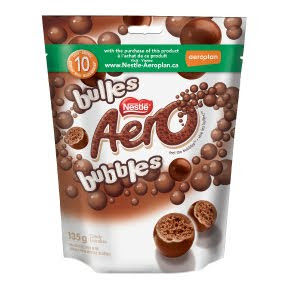 Email ThisBlogThis!Share to TwitterShare to FacebookShare to Pinterest
Labels: chocolate, things that are most likely the devil 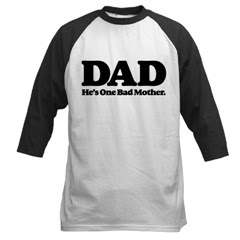 Email ThisBlogThis!Share to TwitterShare to FacebookShare to Pinterest
Labels: fathering

My friend G-rant and I like to challenge each other to work weird words into the conversation unbeknownst to other listeners. You guessed it--we're geeks. Inspired by that, I bring to you, "weird word-of-the-day Wednesday." Appropriate considering that Wednesday is one freakin' weird word. Today's word:

Tittynope (noun): refers to a small quantity of anything left over, a measly morsel.

Work that into the conversation folks. Straight face required.
Posted by DB Stewart at 10:47 PM 2 Comments

Email ThisBlogThis!Share to TwitterShare to FacebookShare to Pinterest
Labels: tittynope, weird, word of the day 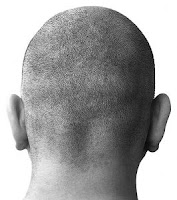 Since shaving my head as part of a cancer fundraiser, I have noticed something that I suspect is similar to what pregnant women experience. Instead of rubbing my belly though (which might be somewhat appropriate considering the current state of my belly's bulge-ness), people like to rub my head. Yes indeed, people--even strangers--enjoy patting my pate, caressing my crown and okay, enough with the excessive alliteration. Sorry.
Anyway, I sort of love this. A group of people surrounded me recently and one person rubbed my head forward and said, "kitty," then rubbed it back and remarked "porcupine." Back and forth, back and forth, this went on for a while and I just waited and smiled. This is what pets experience all the time I guess.
And who wouldn't want to be a pet? Adopt me. Feed me. Scratch me. Pet me. Tell others how much you love me. Take excessive photos of me and include me in your updated status. Let me put my head out the window while you drive. Hold news conferences when I am treated poorly. Thrown me a bone every once in a while. Isn't this like every guy's dream?
Posted by DB Stewart at 1:35 PM 2 Comments

Email ThisBlogThis!Share to TwitterShare to FacebookShare to Pinterest
Labels: cancer, pate, pet, throw me a bone

What's Little Red Riding Hood got to do with it? Did you know that Little Red Riding Hood's first name was likely Blanchette? I didn't know that. I assumed it was "Little." Although a few sources confirm this, I can't really prove it and that is precisely my point. How much do we really know about what we think we really know?

Socrates said, "The only real wisdom is knowing you know nothing."

The older I get, I wonder sometimes, why do I know less and less? Shouldn't I have the answers for everything by now instead of more questions? I just don't know what I know anymore. Can anyone ever know anything with absolute certainty?

I guess there are a few things I still know with all my heart and soul.
Drat! Yet again, I've established I know nothing.
Posted by DB Stewart at 10:49 PM 4 Comments

Today, my wife and son and I and a lot of other locals had our heads shaved to help fundraise for cancer research. Someday cancer will just be a word. Do what you can. 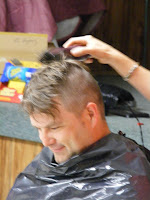 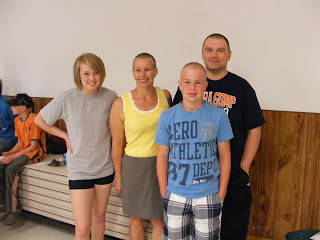 “I'm not a dreamer, and I'm not saying this will initiate any kind of definitive answer or cure to cancer, but I believe in miracles. I have to.” ~Terry Fox
Posted by DB Stewart at 12:03 AM 6 Comments