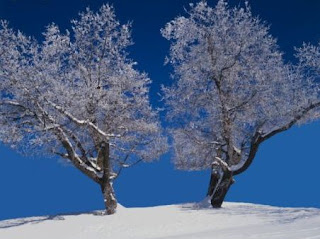 Eight years ago this week, my Dad left our home and returned to Saskatchewan for Christmas and to await another spring, his favourite time of the year. Before he left, he stood at his truck, afraid someone was going to hug him. While my wife and kids and I hugged my Mom, my Dad stood his ground. I obliged his unspoken request but my wife and children (just barely school-aged then) didn't. The next time I saw my Dad he was dead. I had a feeling. He died suddenly on a cold spring morning the following April. My Mom said he was eating breakfast and suddenly pushed the table away and fell to the floor.
In the past eight years, I have thought about my Dad many days. We didn't have a typical father-son relationship. I suppose no one does. What is a normal relationship? And yet our relationship seemed closer than the one my older brothers had with him. At least, I think it was. (As close as Dad might ever get.) Yet we didn't agree on much. I am still the black sheep.
My brothers are practical and responsible and industrious. They are what he expected. Me not so much. I once thought I was his opposite but I'm not, and yet I am. Confusing, I know, but I'm trying to explain. I saw the side of my Dad other people rarely ever saw simply because I was always seeking to know the real him. I saw the cracks and I pried them open. I never bought his facade and I challenged his bullshit. I asked personal questions. I rattled him. I got under his skin. I very rarely ever intentionally disrespected him and I surely did not want to purposely disappoint him but I didn't avoid anything out of politeness either.
And I think I became the side of himself he hid, the side I pried open, the side I was so keenly interested in: the man who loved movies and stories and beauty and humour, the curious man, the man who dreamed of flying, the man who wanted to explore the world, the candid man, the emotional man, the spiritual man, the foolish, silly man who didn't act his age. Sometimes I'm positive I became the man he might have become if his mother hadn't become frail and absent and bed-ridden for almost two decades and his father had not become an alcoholic. In other words, the man he might have become if he had actually had a childhood.
Is that what we do with parents? Mine them for the qualities we want to inherit and disdainfully discard the rest? And then wind up with what we chose and their worst qualities too? I seek to make you understand him and yet I didn't really understand him myself.
He was and wasn't many things. Just like me I guess. And if I could, I probably wouldn't change anything about him. Miss you Dad.
Posted by DB Stewart at 1:22 PM

That was a beautiful post, so much so, i was sobbing into my lunch... Thanks for putting that up there, not that it means much to you perhaps, but it really did touch my heart.

I see what you mean about our dads and our relationships being alike. This a great post guy. Gives me that quiet respectful feeling for dad who hates hugging but loves deeply.

What a wonderful tribute!

Beautiful tribute to your Dad. I read once that a child can often end up living out the unlived life of a parent. It's some kind of psychological truth.

Some of your Dad's quirks are purely typical of his generation though, thinking of my own Dad. People of that generation never said "fuck" lightly -- to them, it was the ULTIMATE swear word that was saved for when you needed a truly shocking expletive. If someone ever used it, it evoked stunned silence from others. No wonder it's still called the "F-bomb"!

HEy Stu!!
Thank you for this. There is alot I'd like to say, but maybe sometime over a beer.
You've obviously learned so much from your father, and it's clearly played a role in your becoming such a fantastic role model to myself, and I'm sure countless others.
All the best,
K.

That was lovely, and what I get from that was that your Dad was Extreemly PROUD of you, even if he did show it in different ways.

This one hits home for me. I don't think I'd admit it to a lot of people there are a lot of traits me & my dad share. I like to think I became who he would have been if it wasn't for his own "daddy" issues growing up. Typically, we only waited till now, with his health starting to diminish, to resolve our issues. All the same, I'm glad we talk now.

I am moved by this post. I think the best lines were the most revealing:

"Mine them for the qualities we want to inherit and disdainfully discard the rest? And then wind up with what we chose and their worst qualities too?"

Well said. And well memorialized. Maybe your gift of expression is another item Dad left in your toolbox.

Great post dbs. This really makes me think about my own relationship with my dad,

Bet he was and is proud of you. Wish there was a picture to put a face with the tribute.

What a great post, thank you. I lost my father a couple of years ago and I wrote a posthumous letter to him on my blog. So I know its not always an easy thing to do but I also know that sometimes we need to get these thoughts in to the open.

Ok, first? Forget the time he called you stupid. You are a million miles from stupid, and it was just probably all he could think of at the time. Either that, or you did something really stupid, which isn't the same as BEING stupid! And second? You made me cry. This post brought back a lot of memories for me about my own dad (like a lot of your other commenters!). The best memory I have of my dad isn't even something he said directly to me. It's about an old friend of his telling me about how my dad used to show off my school picture every year. I never knew that until he told me and my dad had been dead for a couple years when I found that out.

This is the best thing of yours that I've read. Perfectly poignant without being saccharine. Absolutely exquisite. I think your dad would be embarrassed and proud. Well done.

Thanks to all of you for your kind comments.
@DSWS That makes a lot of sense. Thank you for that insight.
@Keet I always did enjoy talking to you so yeah, we should do that sometime. And no, actually you're the role model. All the best to you.
@VinnyC I'm glad you talk now too.
@vickilikesfrogs I am amazed my Dad only called me stupid ONCE because I was stupid. I like your school picture story. Isn't it great when those sorts of things happen?

This is a deep and thought provoking tribute. I can see a lot of qualities from both my parents in myself and I can see a lot of myself in my daughter - sometimes it is hard to get upset with her when I should be because she is only acting like me.
It was really cool reading about what you had to say about your dad.

@KL Thank you. I can relate to how you relate to your kids.

This is important writing for a man to do. Good job. I'm not ready.

I have an odd, difficult and yet simple relationship with my Dad too. I really get the prying to get to know him aspect. I know him and I don't. We can settle into comfortable silence when we are together, but put him on the phone and we are both fumbling for words.

We don't know what to do with each other, but make jokes.

I hope it changes some day. I sure love him.

@Michael I agree.
@Chelle I hope it changes too. Don't give up.