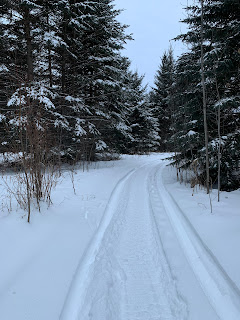 I own a snowmobile now. WHAT?

For Christmas—I'm still flabbergasted—my wife surprised me with a GD snowmobile! I literally bawled. It's a dream come true.

It's used. It's not fancy. It has duct-tape on the seat. It's the skidoo brand, and yellow, but I forget the number, or whatever? My son explained it all but, shrug, unlike him, I can't seem to store vehicle information in my brain. Anyway, it's perfect.

But this particular dream was moved to storage many years ago. Growing up in rural Saskatchewan, we had old "putt-putt" snowmobiles which my Dad mostly obtained through bartering over unpaid mechanics bills. This coupled with 1970s-style adult supervision—aka absolutely none—my childhood obsession was born. (Read here for an example of no supervision whatsoever style snowmobiling.) Later, my Dad gave my young son a miniature snowmobile which kickstarted his obsession, and now he has his own. Sure, we borrowed snowmobiles from family members over the years and made some great memories, yet own one? That seemed like a complete luxury; I could never seem to justify spending the money. Admittedly, my vibe is 100% cheap bastard. (My wife's vibe is 100% not.)

Bitterly cold in Alberta this December/January, my son and I finally spent last Saturday zipping along the local river up and down the trails and hills and through the thick spruce trees and swamps. (Insert contented sigh here.) Afterwards, my son and I were talking.

I asked him, "What does snowmobiling feel like for you?"

"Freedom. Happiness. How would you describe it?"

I had not stopped smiling the entire trip; I thought back to the constant elevation changes, squeezing through narrow tree-lined trails, getting stuck on the side of a hill that felt like about 110 degrees (my son knew what to do), admiring my son's intentional launch stunts, and likewise all my unintentional launches...I replied,

"In the best possible way, it feels like being a ball gently tossed back and forth, but you're not just the ball, you're also the person tossing."

We laughed, both recognizing the delightful chaos. And although my description was a bit silly, I later checked my iPhone's health app; despite little walking during our trip, my app indicated I had climbed 34 floors.

Friends, I wish for you all a dream come true (and a snowmobile ride here and there), plus, most importantly, a son or daughter or anyone really who loves what you love. 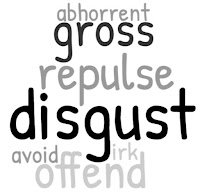 Words. They're everything. Once you know the word, you begin to understand. Take "neo" for example; the standard definition is "new," yet it also means "a new or revived form" of something. There's an interesting space between those two definitions, a space for complexity and deep contemplation.

Consider neophobia (fear of the new) and neophilia (love of the new). A recent NYT article proposed that disgust is at the core of human behavior—we are oriented by what we can and cannot tolerate, what attracts or repulses us. It's not a stretch to see how this is reflected in all aspects of society from eating habits to racism. We can see how neophobia and neophilia become mindsets; we can consider how this impacts progress. In between these two words is an entire philosophy that asks, what would we prefer to embrace and what would we prefer to turn away from? Essentially, what are we afraid of and why? How do we find a way to love what we think we should ignore, dismiss, or worse: actively hate? Pondering this mindset might be a key to open what's locked, shift what's stuck, or heal what's broken.

My granddaughter has a new tooth, her first one—one might say a "neo-tooth." Ultimately, everything about my granddaughter is both neo and in new or revived form. She evolves each month, and she's an absolute delight and inspiration. My granddaughter embodies neophilia. She's also the human prototype: both the teacher and the lesson. Dear friends: think about that.

I used to write a newspaper column. In late December, an old friend texted a pic of one of my columns; she said it gave her hope for 2022. Although I can't recall when, I remember writing it and hoping it would make a difference to someone, besides me. Post Christmas

It begins with some lines from one of my top three Christmas songs, Sarah McLachlan's Wintersong.

"The lake is frozen over, the trees are white with snow and all around reminders of you are everywhere I go...when silence gets too hard to handle...I daydream and stare."

If you celebrate it, Christmas and New Years can be like a big bowl of chicken soup. But for some, the warm celebrations are overshadowed by those not present, by those empty, empty chairs at the dining room table. A chair where my Dad once sat. A chair where your Grandfather once enjoyed his coffee with much too much sugar, where your cousin once played his guitar, where your spouse winked at you, where your child giggled, where your sister spread jam on her freshly-baked bread, where your friend lifted a wine glass and said, “Cheers.”

Many of us are missing someone all the time, but especially during family-time. I wonder about those who feel an even deeper absence though, for those who “daydream and stare,” aching inside for their departed loved ones.

Whether days or years or decades have passed, a broken heart still aches. Holidays and celebrations may seem like touching a tender bruise. And when the celebrating is over, those chairs may seem especially empty.

If you feel that way, I wish I could do more than just write this for you. It’s a small offering for those who are feeling so deeply blue.

Please know that you are not alone. Regardless of the scars we have, the weights we carry, we are all invited to approach every day the same way: with hope, if only as much as we can muster. Each sunrise pushing away the darkness is another valuable day no one wants you to waste—especially those you wish still filled the chairs at your table.

Similar to last year, I read much more digital than print this year. I want to say I didn't read enough, but why focus on regret? Much of what I did read in 2021 was exploratory: explore myself as a a father, a spouse, a grandfather, a teacher, a creative, a human, and whatever else I might become. As I age, I feel privileged to be able to let curiosity lead. Grateful.