My favourite childhood babysitter was the TV, and like many Gen X kids, it was also my only babysitter. Alone a lot, TV/film characters became family. One of those characters was Laurie Strode (Jamie Lee Curtis) in the film that made her a star: Halloween. In a strange way, she watched me every Halloween that film was telecast. Even after that first viewing, I wondered and worried about Laurie Strode, and it made me a life-long fan of Jamie Lee Curtis. So when she popped up in my favourite film so far this year—the fascinating and chaotic Everything Everywhere all at Once—I was even more riveted.

In an early scene in that film, her character, Deirdre Beaubeirdra, says this to her client, the film's lead, about the financial information before her: "Now you may only see a pile of boring forms and numbers, but I see a story." I believe this is the core of the film, a story waiting to be uncovered in the shoe box of loose receipts that is our current lives.

It's hard work to sort through those receipts, isn't it? And yet, if we don some "googly eyes" we might just gain some perspective and clarity about the dominant forces—those "everything bagels" in our lives. We've been experiencing intensified disorder for a decade now. We are inundated with negative voices vying for our clicks and likes. People weaponize flags and honk to breed skepticism, to destabilize, to divide. Cynicism is like a new religion. This film reminds me to put my energy into who and what matters in life, to tear down less and create more.

Sure, I'm just one guy, so what can I do? Even the film acknowledges, "we are all small and stupid." Yet is also proposes that "seeing the good side of things" is "strategic, and necessary." Check those receipts, my friends—like this innovative film, maybe there's another story, a better one.

As we are reminded, it's important to stop and smell the roses, or in the case of my granddaughter, the Dianthus pinks. Note that she has no qualms about being delicate about this. Get right in there, friends, butt in the air as needed.
Poet Mary Oliver advised in her instructions for living a life to "pay attention, be astonished, tell about it." Exactly. What may have inspired Oliver's poem? The object could have been so many things, but for me right now, it's M.
Posted by DB Stewart at 2:40 PM 5 Comments

What's the saying? Man invents wheel; wheel runs over man. Ha. Truth. Our tools can be our greatest strengths and our undoing. Despite my inexperience and some fear, this jackhammer worked exactly how I hoped it would. It DESTROYED my old cement footings and elevated my dopamine levels dramatically. This is why people love power tools, isn't it? It's right there in the name: power.

This beaut of a jackhammer got me thinking. Typically, my most often-used power tools enable me to create. Good stuff. Yet this tool allowed me to dismantle, and it felt powerful. Did the conquer-and-destroy aspect boost my brain's mental state more than say, a palm-sander, or a chop saw? 100%! That seems like a good reminder to use tools responsibly, and like most people, I do. Yet my brain wanted more: what else could I destroy with this jackhammer? Wait. Can dopamine override people's better judgment?

Dear friends: dopamine. It's no joke.

Email ThisBlogThis!Share to TwitterShare to FacebookShare to Pinterest
Labels: ?, evolving, just so, knowledge, neuromathingabobbers, perception, signs, some people, things one should outgrow, things that deserve the stink eye 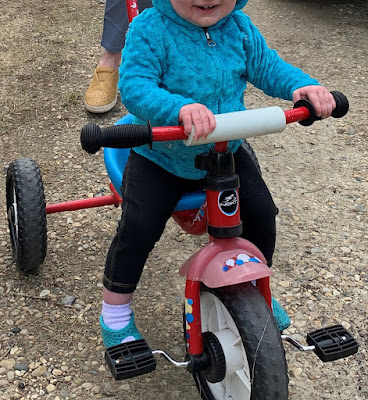 babies like wheels! Also, pancakes, and kitties, and Mom's water bottle, and the piano, and hanging upside-down (thanks Dad), and pulling things out of cupboards, and bubbles, and climbing the stairs and peek-a-boo, and stuffed bunnies that light up, and swinging, and picking tiny things off the floor, and bath time, and going outside, but let's be honest, not socks.
Posted by DB Stewart at 5:31 PM 4 Comments

Remember cat's cradle? One pair of hands constructs the string cradle, then someone else gathers it from those original hands and reconstructs it, pulling it together at the end, hoping the cradle reforms, altered, perhaps even transformed; its new composition surprises. Isn't this essentially the relationship between writer and reader? I construct these words and yet you, the reader, reconstruct them based on your thoughts, experiences, and feelings.
Writer Sarah Manguso said, "the purpose of being a serious writer is to keep people from despair." These words were new to me, and welcome wisdom. Cradles, indeed.

Despair. It's in everything lately, especially ongoing news about Russia's war crimes in Ukraine. What words could I hope to construct to keep you (& me) from despair? I know a few that dispel despair: trees, sunrises, ice-cream, music, children. Words can seem fleeting though, can't they? Many are not so impermanent though. Which words do you return to when you need them? I think about tattoos featuring words including gratitude, dream, worrier warrior, continue, and so on.

Anne Frank apparently said, "I have often been downcast, but never in despair." I thought about Anne Frank a lot in 2020 as the pandemic raged on and on; she isolated for 761 days. That's some perspective, isn't it? I continue to think about her legacy: her words continue to resonate, anything but temporary. Think of Anne, friends: be downcast if you need to, but do not despair. 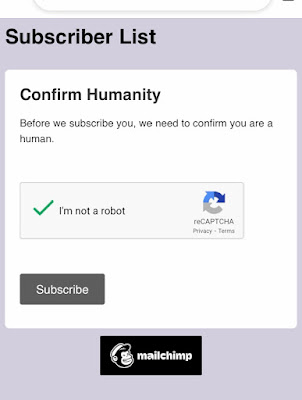 Sure AI, proof of humanity is something you know all about. But I get it. In 2022, humanity does indeed need to be verified. Sigh.
However, if today you seek a fine example of humanity, an example for us all, read about Gabriel Clark.
Posted by DB Stewart at 3:41 PM 1 Comments

Email ThisBlogThis!Share to TwitterShare to FacebookShare to Pinterest
Labels: ?, good people, irks, no, patience, signs, some people, things one should outgrow, things that deserve the stink eye, yeahno

Before our granddaughter was born, I asked my last Grade 9 class for advice on grandparenting. Their suggestions made me emotional and reminded me again how meaningful grandparents can be. As my granddaughter celebrates her first birthday, I wanted to share two of my favourites. I will say that my former students would be proud of me (except for the clothes...but my wife excelled at that one). Today I am grateful for youth, for my daughter and her husband, and for the opportunity to be Grandpops to one special girl. 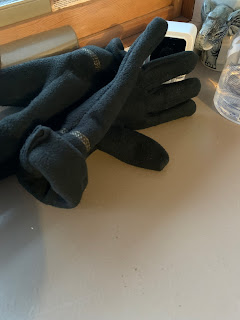 My wife likes to toss her gloves on the desk near the back door. So, what's the problem? Notice that security camera behind them? Sigh.
Posted by DB Stewart at 10:00 AM 3 Comments

My daughter's fridge-magnet makes me laugh. Let's be honest: we all feel this way periodically whether the stress is motivated by work nonsense, frustrating obligations, social strife, when the cat barfs, and so on....
What I find especially clever about this tiny art-piece is its display of chaos in a mundane form—all typically overlooked objects like fridge magnets should be so incendiary, pun intended haha. It's just so honest; we all have those moments when too many suppressed annoyances threaten to surface. Anyone who claims to be mostly serene isn't paying attention or lying in service to perfection, or perhaps shallow? Sorry to be judgy but consistently Zen types confuse me. They are unicorns and I am glad for them but I personally don't know anyone with an entirely passive amygdala. This story-in-a-fridge-magnet is a nod to authenticity. It echoes Thoreau's astute conclusion that many "lead lives of quiet desperation." Similar to Prufrock, it asks, "should I disturb the universe?"
My daughter is nearing the end of her first year as a Mom and she and her partner learned to be parents IN A FREAKING PANDEMIC. So among the toys and the diapers and her job and the weighty emotional labour and countless other things, I am glad she can have this devious cathartic moment at the fridge everyday and then carry on.
Posted by DB Stewart at 9:34 PM 2 Comments

No reason for it.

Ukraine was invaded around the same time I streamed Kenneth Branagh's film Belfast. Conflation tends toward error, but whatever fusion and alchemy I experienced continues to weigh on my heart and linger. Perhaps too, as a Gen Xer, Russian aggression feels a bit triggering, and absolutely deja vu.

Set in 1969, the autobiographical film emphasizes Branagh's most formative "fork in the road" when his Protestant family grapples with deciding whether to stay in an increasingly dangerous and violent Northern Ireland—the only home they have ever known—or escape to Britain. Told from the perspective of Buddy, a composite of Branagh's childhood perspective, the film is like reexperiencing innocence lost. Pure time-travel, the story plots his early life in childhood fragments and memories and each squeezes the heart. It evoked my own parents and grandparents, young and vibrant again—also my childhood traditions, friends, and first crushes; it illustrated well that childhood confusion we all experience when the people we want to trust most make decisions, or are forced to make decisions, that will reverberate in our lives in expected and unexpected ways, forever. It is a universal story, told and retold. I was rapt.

Likewise, I was glued to breaking news reports in Eastern Europe; I imagined those children in Ukraine, their slow-motion escape toward the border with Poland, compelled by fear, confusion, anger, disillusionment, many leaving their fathers behind. There is no reason for it.

History has revealed that Northern Ireland's "troubles" are no longer so troubling. But what will history say about Ukraine and Russia, and the selfish ideology that enabled a conflict currently trending as WW3? No matter what the books written about this someday say, I have to ask again, when will we ever learn from history? Why must we repeat it? And what will our children remember?