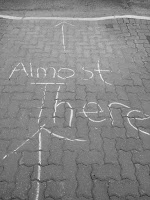 A big crappy chunk of parenting is not not being yourself but accessing another version of yourself, a hard-ass management version. Inevitably, it's necessary. Because raising adults (as opposed to raising children) is sometimes grueling yet critical both for personal well-being and society. Raising adults is super annoying too. And frustrating. Inevitably, there will be hard conversations. There will be lines drawn in the sand. And crossed. And crossed again.

Yet there is also compromise and negotiation and forgiveness too, all of which may feel painful for everyone involved. And of course it's sunnier too: there are birthday parties and vacations and board-game arguments to laugh about (eventually) and a million other funny-tender-soft moments knitted into a fabric more valuable than its design.

But sometimes it was so hard.

Sometimes I would step out of myself and watch us all dysfunction. We were trying to say hear me and listen to me. So were they. And I knew it wasn't working for any of us. Sometimes because what they said or did was so shockingly stupid. And sometimes because we were so confused about what to do. I would hear myself lecturing my teens and bubbling just underneath my frustration was
But let's be honest. My main point was this: I love you. I love you enough and you are important enough that I won't give up and I won't give in even though I soooooooooo want to. Truth: I did give up a few times; no parent gets through this parenting gig without regrets. If only the big picture, the long term perspective, were available when you need a lifeline.

Back then I wondered sometimes if my teens would ever really know me as anything but the asshole who napalmed their hastily defined fun. Would they ever realize I didn't enjoy tearing down that rickety scaffolding they called teenaged life goals? Would they ever be able to acknowledge that my heart was in the right place? Damaged but still beating, not so defiant anymore.

And then it's YEARS later and I forgot many of these events and yet something still lingered for a long time, sort of a melancholy, an ache. I did not dwell on it because I know that shame kills, both the giver and the receiver. And then one morning, my daughter (who lived in a University dorm 48 hours away at the time) texted me because she heard bagpipes, and thought of me.

What?! Me? She remembered I love bagpipes? I don't know how to tell you what that felt like.

Several years later now, our family functions again. There's more to learn, but the past is the past. My children made me a better man. I learned my lessons, so did they. Once again, we connect, we celebrate, we endeavor to become who we dream to be. It's a privilege many don't have. I'm not so naive anymore: I know there will be hard times again. Yet a tender core survived. I don't know where I read it: "thick skin like a rhinoceros, tender heart like a lamb."
Posted by DB Stewart at 4:07 PM 4 Comments

showing who you are on the inside.

Vulnerability requires courage. It might feel like you're breaking. In a way, you are. But the beauty's inside. Bring it out. Your honesty will encourage others to be more authentic too. And it frees us to become more.