In one sentence, why? 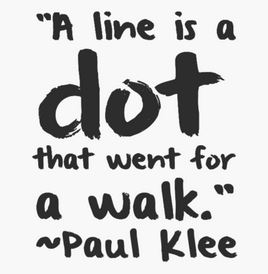 In its playfulness (and in a mere ten words), Paul Klee's statement reveals the spark burning at the core of a dot thus the true nature of anything simple might just be much much more than those who aren't really looking could ever fathom and this inspires in me a deeper supposing about Art and creativity and imagination.

What's one of your favourite quotes? And in one sentence, why?
Posted by DB Stewart at 6:00 AM

I do love that quote. As for one of my favorites, I like Yoda's: “Do or do not... there is no try.” I like it because it takes away your excuse for not giving your fullest effort.

That was a good one...never heard it....and the other two comments above are wonderful too.
Gosh...I can't think of a favorite off the top of my head.

This is my favourite today:

Carlos Castaneda: "A man of knowledge sweats and puffs and if one looks at him he is looks just like any ordinary man, except that the folly of his life is under control...His controlled folly makes him say that what he does matters and makes him act as if did, and yet he knows that it doesn't; so when he fulfills his acts he retreats in peace, and whether his acts were good or bad, or worked or didn't, is no way any part of his concern."

I like it because it's kind of punk. In the cool Sex Pistols way.