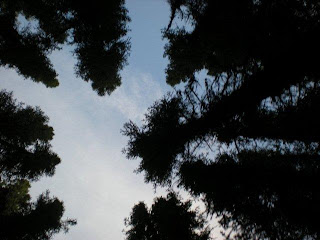 I can't stop thinking about Terrence Malick's film The Tree of Life.

Apparently this film polarizes people. I can see why. It's probably a love it or hate it experience. No meh. I think I loved it. It's so beautiful. It's so strange too. But it immersed me, even absorbed me at times. I can't recall a film that was such an intrapersonal experience for me. The film is so...fraught.

"The nuns taught us there were two ways through life--the way of nature and the way of grace. You have to choose which one you'll follow. Grace doesn't try to please itself. Accepts being slighted, forgotten, disliked. Accepts insults and injuries. Nature only wants to please itself. Get others to please it too. Likes to lord it over them. To have its own way. It finds reasons to be unhappy when all the world is shining around it. And love smiling through all things."

There were several scenes and one recurring image that captured me. First the image: water. Water uncontained and water contained, such as early in the film when Mr. O'Brien kinks the water-hose. In one scene, a dining room chair seems to move on its own. In another scene Mr. O'Brien does repairs underneath a car so very precariously perched on a jack while his son stalks back and forth. That silent scene terrified me. So did the scene where Jack's mother ministers to the criminals. And I still wonder what was going on in the attic?

There's also a tender scene where one brother kisses his kid brother's arm seeking forgiveness for cruelty. His brother wipes his saliva away. He kisses his arm again. Again, it's wiped away.

For me, this scene represents the film's clearest meaning. Humanity. Our inhumanity. Our isolation. Our inter-connectness. And the timeless wayward sad line we all walk in life between tenderness and ruthlessness.
Posted by DB Stewart at 11:03 PM

I think you described the movie really well. I liked it, even if I was a bit perplexed by it. It is beautiful, simple yet complex and so so human...
Watching it is a very personal experience and I don't feel that anyone can stay completely unaffected by it. It's either love or hate as you say.

I've not seen this either but no way would I miss it after that!

Isn't it great when a movie hits your sweet spot?
You have compelled me to see it with your beautiful description.

I have never seen nor heard of that film. Sounds intriging for sure.
I was most moved by the statement ...."find reasons to be unhappy when all the world is shinning around"
WOW
I really want to remember that.
Try to put aside my Mortal self a little, and reach a little Beyond that....
thanks

I'll be checking this one out.

where the hell have I been, once again? I haven't even heard of it. Now I have something to google tonight!

Been mighty curious about this movie. You just decided me on seeing it. And got me talkin lik g w bush.

i saw this in theatres. brad pitt knocked his role out of the park. probably on of the most ambitious films i've ever seen

Alright, I'm convinced. I've got to see this one now.

If I were half as introspective as you, I'd probably enjoy watching more things than just UFC fights.

Oh man. I thought I would love this movie, but I didn't. There were some beautiful parts, sure. But it went on way too long, and needed some serious editing. Didn't help that my husband got food poisoning 3/4 of the way through.

Nice review. This one was a right brain experience for me. I was mesmerized by the pace, the mood, and the music. I left feeling like I was educated in a deep way in a place just below consciousness.

Wouldn't it be lovely to live by grace?

Oh, wow. Your words definitely make me wanna see this. I have seen some tweets that I guess could serve as examples of that polarization you mention. The stuff you picked up on, though...I live for that stuff. :)