The Real Hogmanay (from a true blue Scot!) 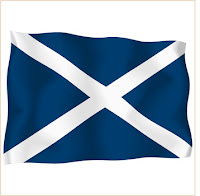 I had to publish the reply I received from a true blue Scot regarding my New Year's Eve post in which I shared my jealous and pea-brained understanding of Hogmanay, Scotland's terrific New Year's Eve celebrations. For helping educate this Canadian who is now even more determined to someday partake in these festivities, Alistair totally made my day! His reply is as follows:

What about the haggis? Al, thanks! I'm sure this info will come in quite handy someday. I can't imagine how, but I'm sure of it.

LOL. Thanks Al and dbs.

That well known delicacy the haggis or 'Great Chieftain o' the puddin' race' is a bit of a misnomer actually. We really only make it for two reasons see. One is so we can laugh at the expressions all the tourists make as they try to eat the stuff and the other is so we can eat it ourselves, ostensibly proving - if such a thing was needed - that we are superior to other culture but in reality forcing down something that means you have to immediately reach for another drink.

No, I'm just joking. Haggis is a wonderful dish. Catching the wee buggers in the first place can be a bit of a challenge though.

For more help dealing with our wonderful Scots language try this post......

ps. Thanks for the mention dbs

Love it. I'd write a longer comment, but I got a wee bit puggled last night, to the point where even my stocious wife said, "Aye! Look at you, oot yer face!"

I spent some time in Scotland in Edinburgh and Aberdeen long ago. It was transcendently beautiful there, filled with excellent pubs, amazing hills and mountains and perhaps the worst food known to man.

LOL @AL now you're going to have everyone think Haggis is some sort of small furry animal! :)

I guess all this poor Hungarian can say is Happy New Year.

@Nicole See above.
@Missy I know. It's great isn't it?
@DSWS Gotta love em.
@Alistair Thank you for even MORE info. P.S. Let's go haggis hunting together sometime.
@DP Thanks. Hope you feel better soon.
@LoC I look forward to it all someday.
@A&G think.stew@gmail.com
@alittlesprite Isn't it?
@MrsTuna And a happy Hungarian new year to you too.

I kind of shook my head a few times...but that's probably just me.

I think I missed something.

#1 - Does he mean "going regimental" under a kilt? Or does he mean stark-raving naked?

#4 - Yet more confirmation that I am indeed a Scot. I do that too.

#9 - I must go back and read the original post.

Wow, you Scots live it up way more than we Jews.

@Cheeseboy Ha. Our testosterone brain cell ratio might be a little wonky though.

I love it and I would probably be one of those tourists guilty of checking to see if they were wearing anything under the kilts! LMAO