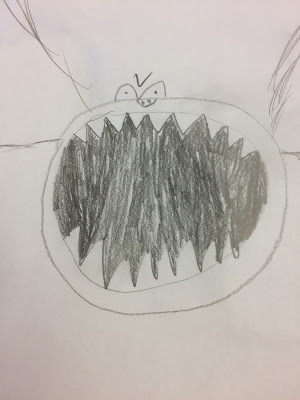 If a kid gives you a drawing, pay attention because that is an honour, a true gift. It's also a reminder of who you used to be.

Sadly, most of us outgrow picture-giving. But why? Is it because it's just too vulnerable? Is it because we fixate on so-called imperfections? Why do most people think they can't draw? Why do we become so self-conscious? When exactly did that inner critic suffocate the artist within?

Kids don't much care about that stuff. This drawing may look a little nightmarish, but it's definitely a delight. That gaping maw looks like some sort of invitation to another world, a world where carefree kids live, where imagination and creativity is still more important than banal conformity. Don't be afraid. Go ahead, hop in there. Explore.
Posted by DB Stewart at 9:28 PM