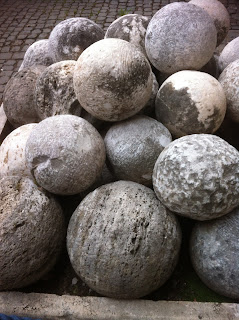 These stones, manufactured to protect the Castel Sant'Angelo in Rome, are stacked in a pile not far from St. Michael, sculpted by an assistant to Michelangelo, believed to be the spiritual warrior, a symbol of the inner struggle to combat evil, the "battle within."

I had to admire these stones. A fan of historical warfare, I sometimes marvel at the ways men of ancient times fought like boys, quite similar really to the way my boyhood cousins and I would play rock wars and use sling shots like catapults while we hid in groups behind piles of construction gravel along the roadways near our homes.

Please don't misunderstand me though. I know it is inappropriate to romanticize war in any way, yet when I consider modern warfare and weaponry by comparison...it sickens me. Especially today, another day swallowed up with senseless terrorism. And it makes me wonder: then or now--which was more barbaric?
Posted by DB Stewart at 9:08 PM

Email ThisBlogThis!Share to TwitterShare to FacebookShare to Pinterest
Labels: ?, danger, let's be honest, mistakes, motivation, problems, sometimes, stumped, technology, things one should outgrow, things that are most likely the devil, things that deserve the stink eye

Barbarism is one of the unswerving constants of human history.